Those who have been following me on social media have probably already heard about this but I think it's time to make a more formal post about my latest game project. The game has no name yet but it's a minimal twin-stick shooter game where you play as an astronaut on a cargo salvage mission on uncharted planet full of hostile lifeforms. It will feature low-poly aesthetics (as usual), procedural generation and moddable weapons.

I have been working on this more or less since I finished Polychoron. The basic core gameplay mechanics are starting to take form but there is a very long way to go until this is a proper game. I haven't set any hard deadlines for myself so the game is ready when it's done. Probably not this year :)

For more frequent updates on the development progress, follow me on social media.

High score pages are back

Now you can again see the online high scores for my games here on the website:

This isn't really a new feature. The original high score pages broke long time ago and I had to remove them. Now I finally rolled up my sleeves and created new functioning pages.

This is a minor maintenance update. It has been nearly three months since Polychoron release and I have received very few bug reports. I take this as a good sign.

There are some crashes reported on Google Play. Most of them seem to be related bad GLES3 support on old Android versions and luckily they seem to be affecting only a small number of players. I would like to fix these too but they are very hard to resolve unless workarounds are implemented in Godot Engine itself. I did upgrade the engine to latest stable version (3.4) which should at least improve input responsiveness on lower end devices.

Vast majority of the players have been playing the mobile version, which feels kind of weird as I have always viewed Polychoron as primarily a desktop game, best played with mouse and keyboard. I thought playing a 6DoF game on touch screen would be impossible but I'm glad to be wrong. Ratings and reviews have been mostly positive.

Here are the changes since version 1.0.0:

It's done! After two years since the initial game jam game, Polychoron is finally ready.

There are very few changes since the last beta version:

I also upgraded Godot engine to version 3.3.3 which brings a couple of relevant bug fixes:

If you're wondering where all your precious high scores went, they are still there but only visible in previous alpha/beta versions. Due to so many changes affecting game's difficulty during development, I decided to "reset" the high scores on this release to allow fair competition from here on.

Polychoron is now available as pay-what-you-want title on Itch.io (no minimum payment).

This update to Polychoron brings minor improvements, bug fixes and adjustments to the difficulty curve.

The most important change is the improved line of sight testing. Previously, a patient player could easily lurk behind corners and find shooting positions where the enemy does not see the player. It's still possible but a lot harder. The enemy now shoots at the player even if it only sees a part of the ship. This also fixes the cases where an enemy drone is already partially visible from player's starting position.

There is now an option to draw a white wireframe overlay on top of the maze geometry. This was primarily intended for the mobile version to improve visibility when playing in brightly lit environment but I decided to include it in all versions. 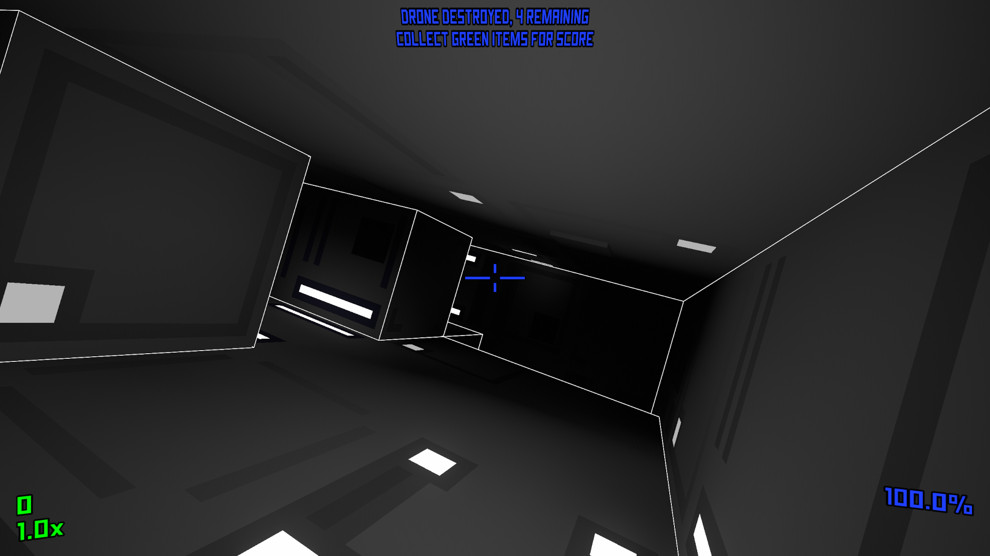 The game's difficulty curve has changed slightly. As the line of sight changes make the game a little harder, the enemy weapon damage and projectile speed now increases a bit slower. Their delay from target detection to shooting decreases faster now but starts higher. Please let me know how these changes feel.