As promised, the first Polychoron alpha version is here! And before anyone asks about the version number, yes, it's technically second alpha version. Just first one with this name. 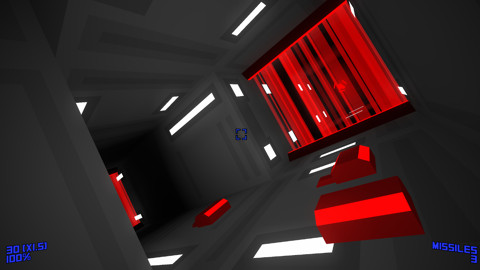 I haven't set up any game pages yet, so here are direct links to files:

Check out readme.txt file included with the desktop version for documentation on controls. If you choose to play using gamepad, make sure it's a good one. Bad analog sticks (with hard-coded dead zones) on many cheap gamepads make precision aiming frustratingly hard.

Although the game has been developed primarily for desktop, I have put some effort into keeping the mobile version alive too. In practice it's the same exact game but with an experimental touch screen controller. Considering that I initially deemed the task of cramming six-degree-of-freedom controls on a touch screen impossible, I would call the current state usable.

I rarely play any mobile games because I hate touch screen controls for anything more complex than basic tap and swipe. However, I have seen other people enjoy even first person shooters on mobile, so perhaps someone could be play this game too.

After studying how some first person shooters handle input, I ended up splitting the screen into two parts. Right side is all for pitch and yaw using dragging and left side is for movement. The size of virtual joystick areas can be adjusted in the settings. Since I now had no place for primary shoot button I had to improvise. I tried the usual button inside the drag area but I found it too hard to use. What worked surprisingly well (at least in my opinion) is double-tap-and-hold gesture. Double tapping anywhere on the right side starts shooting and lets you aim freely until you lift your finger. 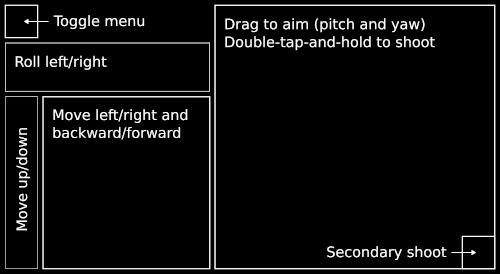