Those of you who follow me on Twitter or Instagram probably have noticed that I've been posting screenshots from a six-degrees-of-freedom maze shooter game project for quite a long time now. The main reason why there has been no mention of this project here is that I wanted to wait until I come up with a proper name for it.

I don't think I have ever had this hard time naming a game. After a very long list of rejected and mediocre name ideas, I found one that actually feels like a perfect fit: Polychoron. 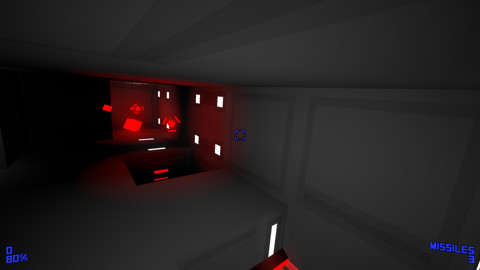 The game is a simple flying and shooting game in zero gravity environment in series of unique mazes. The objective is to take out hostile drones guarding the maze, collect score items and power-ups and reach the next maze alive. Each maze will be harder than the previous one and eventually you will die. No-one survives the maze. On the bright side, when you die you have a chance to get your name on the high score table and earn eternal glory.

The game is heavily inspired by 90s six-degrees-of-freedom shooters like The Descent and its sequels. It started as a Linux Game Jam 2019 game that I picked up again after I released Hyper Ultra Astronautics.

This is my first "proper" game project using Godot engine. I first found the engine when I was looking for some way to easily create the mobile controller application for Hyper Ultra Astronautics without getting too deep into Android and iOS development. Since then I've been tinkering with it and learned to really like it. It's a little rough around the edges but it's beautifully simple, open-source, cross-platform, 100% free and improving fast. I will miss my own C++ code base that I have spent over a decade working with but with Godot I can use my time more efficiently.

The game is currently in playable state and I will likely release the first public alpha version "soon". There will be the usual Linux and Windows versions. I would like to release a mobile version as well but six-degress-of-freedom controls on a touch screen seem practically impossible. We'll see how that goes.