It's about time for a progress report on my local multiplayer Asteroids -clone. Since last mention here I have settled on a name for the game. It will be called Hyper Ultra Astronautics.

Lately have been working on improving the look of the game and adding more weapons. There are currently four different weapons and a repair bot power-up. Here's a plasma beam weapon in action: 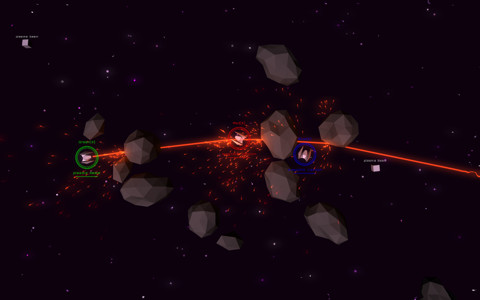 And this is what a kill be guided missile looks like:

While you can already fly around and shoot each other for fun, the match still never ends and no-one is announced as winner. The game menu is very minimal and a lot settings are hard-coded for now. I should really start to build actual game around this. Fine-tuning the core mechanics is just much more fun :)

I have thought of eventually adding score based game modes where you compete against other players or aim for high score co-operatively. This could allow a basic single player game too. However, I'm focusing on the local multiplayer gameplay first.

I'm afraid the big problem with this project is again going to be the lack of testing and feedback. Mostly because you will need friends physically present to set up a proper match. Once the game has a bit more flesh on its bones, I will start releasing a public alpha versions to gather some feedback.