It's been quite a while since last alpha release. I'm currently in a point where I will soon need to decide whether I should release a new alpha version with what I have done so far or post-pone the release and continue working on new features.

In addition to the new collectible items mentioned in last progress report I have added force fields. There are three types of force fields: destructive, protective and damping. First two do what you'd expect them to do. The last one damps movement and allows falling long distances without damage. Here's what a protective force field looks like in action:

I have also created one more single player level that lets you use the force fields. The following screenshot from the new level shows the damping force field: 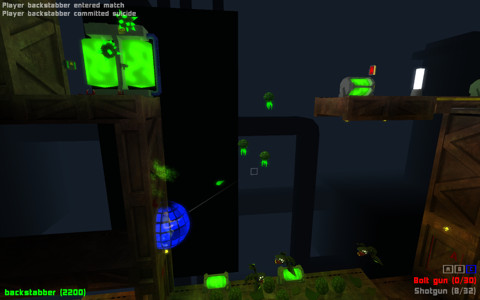 Many of the existing levels have been edited to take advantage of the new collectible items. Adding force fields to existing levels will require more changes to levels, so I'll leave that to the point when a couple of other gameplay changing features are done. I will inevitably have to do some redesign on existing levels at some point, because the game itself has changed a lot since the time when the first levels were designed.

Starting from next alpha version the game will automatically notify you when a new version is available.